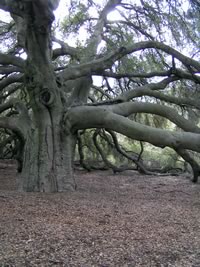 The Luiseño people enjoyed life in a land rich with a variety of plants and animals.  They were hunters and gatherers.  Women gathered seeds, roots, wild berries, acorns, wild grapes, strawberries, wild onions, and prickly pear in finely woven baskets.  They made a tasty ground acorn mush, “wìiwish”, a staple food, high in protein.  The men hunted deer, rabbits, wood rats, ducks, quail, seafood, and various insects.  Hunters used bows and arrows, atlatls or spear throwers, rabbit sticks, traps, nets, and slings to catch the game.  Fishermen and traders used tule reed canoes in the ocean and tule rafts in the rivers or lakes.  Family groups had specific hunting and gathering areas in the mountains and along the coast and the boundaries of these areas were crossed only with permission.

The territory of the Luiseño people extended along the coast, fr 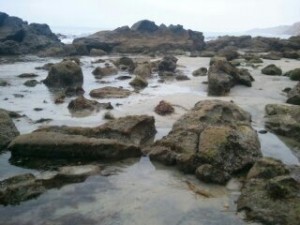 om the north near San Juan Capistrano, south to the Encinitas/Carlsbad area and east to the valleys of the coastal mountains and Mt. Palomar.  Today this area is in northern San Diego, Riverside, and Orange counties.  The Uto-Aztecan language that the Luiseños speak is vibrant and complex.

The people lived in small villages near fresh water sources.  Each 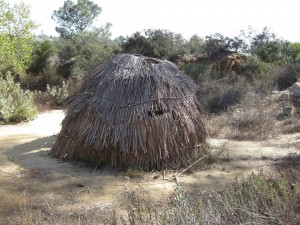 home or “kìicha” was built of arroyo willow, yucca, and tule.  The kìicha was dome-shaped with a small smoke hole on top and the floor dug down 2-3 feet into the earth. This design served to insulate the hut, keeping it warm in the winter and cool in the summer. A large  granary basket made from willow was kept outside the kìicha, raised off the ground, to store acorns.

People cooked food in a variety of ways.  Often, they cooked in clay pots over fires or in baskets with hot rocks.  Sometimes they wrapped food in clay or leaves then placed it on hot coals and buried it.  They roasted meat over hot coals or rocks.  The Luiseño used mortar and pestle for grinding and pounding food.  They gathered root plants with digging sticks and used antlers for prying objects loose.  Needles were made from bird bones and cactus spines.  Rock chips were used as scrapers.  Elaborate sandpaintings were made for special ceremonies.  Basket weaving remains a fine art among the Luiseño people.  Pictographs that still speak to us from the past are being preserved at local sites.

Young children spent much of their time playing games, swimming, learning to make and throw rabbit sticks, and learning to weave baskets.  When boys and girls reached the teen years they had initiation ceremonies to learn the customs and respectful behaviors they would need to lead a good life.

The Luiseños had their own religion with rituals and ceremonies that were led by the village chief and a spiritual leader.  These ceremonies and rituals had specific songs and dances that were held sacred and were performed only by those chosen.  Flutes, rattles, whistles, and clapper sticks made the music.  The beliefs of the people gave meaning to their lives and instilled in them a moral conscience and a respect for nature.

European influence on the Luiseño people was limited until the mid 1700’s.  The Spanish set up the mission system to bring the Catholic religion to the native people and to protect their claim on the land of California.  The Mission San Luis Rey was built in 1798 and the missionaries worked to destroy the Luiseño way of life in their efforts to convert the Indians to Christianity.  The native language, religion, way of life and culture began to break down as the Indians were separated from their families and forced to live and work in the Mission.  Many people died from illnesses and poor living conditions imposed upon them by the missionaries.  The name “Luiseño” was given to the people by the Spanish as a result of their proximity to the mission.

The Mexican government gained control of the area and the mission period ended in 1834. Unscrupulous ranchers took rich, fertile land from the native people.  Some of the displaced Luiseños worked on the ranches as cowboys, servants, or laborers.  Others attempted to return to their native way of life.  The region became part of the United States in 1848.  T 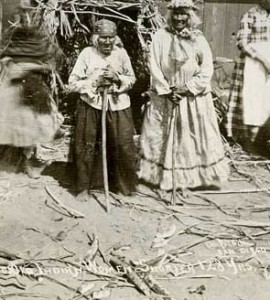 he Luiseños had few rights and many were sent to live on reservations.  Children were forced to attend boarding schools and not allowed to speak their own language or practice their native customs. There are many native elders alive today who still suffer from the horrific abuse that took place in the government sanctioned boarding schools.

Despite the efforts of the missionaries, Mexicans, and Americans to destroy the culture of the Luiseño people, our ancestors continued speaking our language, singing our songs, telling our stories, weaving baskets, and passing traditions on into the future.  Sometimes this was done in secret; always with great determination.

DuBois, Constance Goddard, ”The Religion of the Luiseño Indians of Southern California”, University of California Publications in American Archaeology and Ethnology, Vol. 8. No. 3. Berkeley: The University Press, 1908.

Sparkman, Philip Stedman, “The Culture of the Luiseño Indians”, University of California Publications in American Archaeology and Ethnology, Vol. 8. No. 4. Ramona: Ballena Press, 1908.